Soul. That intangible something about someone so often hard to pin down; sometimes found in unfettered intonations of humanity, sometimes in the quiet lyricism of a poet’s patterns of speech, sometimes in the eyes of those blessed with the ungovernable desire to create a better world.

As it happens, all the above descriptions of “soul” shines through Nonkululeko Britton-Masekela, a rising star in the agricultural sector, who runs a President Park-based (close to Ebony Park, Midrand) farm called Kula, which produces strictly seasonal organically-grown vegetables.

“Kula”, she says, “means ‘to grow’ in Xitsonga or ‘to eat’ in Swahili. It’s also a Sanskrit word that can be translated as ‘community, clan or tribe’ or ‘community of the heart.’” This implies that the community of people has shared values and a shared sense of valuing and connecting with each other (through food).

These values are at the heart of how she manages her business which she describes as being a “fresh food movement, aimed at providing her neighbourhood with safe, organically grown, and fresh local produce and information on a more conscious way of eating and living”.

She speaks of life on the farm and the network of urban farms in Johannesburg as a village. She is hesitant on using the word “ubuntu”, a philosophy she believes has been co-opted so often by corporate South Africa that much of its true meaning has been all but emptied. Britton-Masekela nonetheless admits to creating an environment where the basic principles of a shared humanity (the original pulse of ubuntu) are grown and nurtured on the farm.

She regards the workers under her eye with the highest regard, often drawing on their knowledge for the betterment of Kula and, when blind-sided by her own management shortcomings, she seeks counsel in the elders of partner farms, who generously make their wisdom available to her.

Though just beginning to break even – two long years later after spending close to a quarter million Rand from her own pocket on the farm – her future plans with Kula are to ensure that it serves a broader purpose than profit-making. She envisions a world on the farm where workers are stakeholders in the business, spelling these plans out with the lyricism of the unceasing poet in her, “I want to see impact beyond the balance
sheets.”

Furthermore, keenly aware of her status as a woman leader in her chosen field, she encourages other women wishing to enter the industry to begin by breaking the mental shackles, chained to them by the forces of patriarchy, through education. By this, she insists she doesn’t mean formal education alone. She calls on women to have the “audacity to empower themselves through reading, asking and digging for knowledge, especially when it comes to business acumen, where women are largely falling behind.”

In total, perhaps Nonkululeko Britton-Masekela – her soulful nature, her depth of humanity and desire to create a better world through her enterprise – can best be summed up in a verse of one of her poems, entitled Ahh Mama:

Our mother who art(s) all around us
Mama, Mme be your name
Your Queendom has come
Your will be done
And children fed on this earth
For this is our heaven 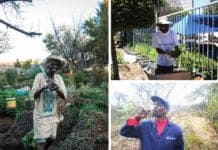