Yes, precision irrigation is possible on a budget

by Duncan Masiwa
in News
Reading Time: 5 mins read
A A

While Mzansi’s agricultural community celebrate the announcement of nearly 700 000 hectares of state land being made available for agricultural purposes, some leaders have raised red flags.

This follows an announcement earlier today by the minister of agriculture, land reform and rural development, Thoko Didiza, that eligible farmers will have an opportunity to get their hands on 896 underutilized or vacant farms between 15 October and 15 November this year.

This after president Cyril Ramaphosa’s promise in his February 2020 state of the nation address that government would be releasing state land to deserving candidates amounting to 700 000 hectares.

While this may be a breakthrough for South African agriculture, Willem de Chavonnes Vrugt, chair of Agri SA’s centre of excellence for land, have cautioned against corruption and what he described as the department’s “poor track record”.

He said although the release of state land is great news, it is critically important to ensure that land will be used productively for farming purposes when selecting beneficiaries.

“It is regrettable that district land reform committees, in which organised agriculture had been represented, are no longer in place. The private sector and organised agriculture can play a valuable role in the selection of beneficiaries and support for such beneficiaries. Agri SA would like to see district land committees making use of such expertise,” added De Chavonnes Vrugt.

Agri SA welcomed the option to purchase that will be afforded to selected beneficiaries. In her briefing, Didiza indicated that government will be offering successful farmers a 30-year-leasehold, with an option to buy. The department, however, has a poor track record when it comes to managing leases, said De Chavonnes Vrugt.

Furthermore, he warns although the minister intends to conclude written lease agreements with beneficiaries within 30 days, this has not been the case in the past. According to Agri SA, beneficiaries have often not received written agreements.

Agri SA said that it is in favour of awarding the full title to beneficiaries and added that the undertaking of land being managed productively for farming purposes, is also positive. De Chavonnes Vrugt reiterated that agricultural land was a scarce resource.

In the much-anticipated briefing, Didiza announced that the government will issue advertisements of state land available measuring to measuring about 529 014 hectares.

The state land available will be divided as follows:

Only South African citizens, 18 years or older, will be considered. Applicants must indicate their current farming interest area, and if successful, must be willing to work the land full-time for the duration of the lease contract of 30 years.

Furthermore, those applying need to demonstrate the capacity and basic resources to work the land, although the department will be providing support.

First-time farmers will also be considered. 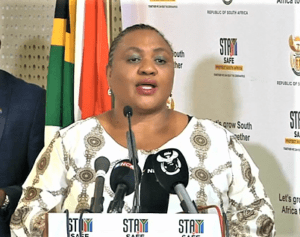 However, Didiza said her department will be biased towards farmers with at least three to ten years’ experience and more.

The minister also stated that after the closing date, all applications received will be compiled and captured on a database per district in each province. Both successful and unsuccessful applicants will be informed of the outcome in writing.

Unsuccessful farmers will have the opportunity to register their appeals to the land allocation appeals committee.

In the next two weeks, application forms will be made available to farmers wanting to gain access to the land. Forms can be collected at district and provincial offices of both the department of agriculture, land reform, and rural development and municipal district offices. The adverts will run for one calendar month starting from 15 October to 15 November 2020.

In her briefing, Didiza stated that all state land earmarked for Gauteng had already been released, while the Western Cape does not have state land that is due for release. However, in other land reform programmes, if and when land is available, it will be released.

Failure to comply with any of the contractual obligations listed above, the state will consider the option of terminating the lease.

Didiza said the department had already released about 135 117 hectares of land to 275 farmers. Out of these beneficiaries, 160 were women, 114 youth, and 1 person with disabilities.

A large portion of the total land released was done in the Mpumalanga, amounting to 50 480 hectares, North West amounting to 46 097 hectares, and Limpopo amounting to 32 170 hectares. KwaZulu-Natal lags behind with 4 940 hectares, Gauteng 929, and Free State 501 hectares.

The minister further noted that her department is aware of certain communities that are utilising state land, without formal approval from the department. “We are also aware the some of the state land might have been invaded in some way or other. Therefore, we are going to undertake a land enquiry process.”

The land enquiry will investigate and determine how individuals and communities that are currently occupying the land got access to it. Based on the outcome of assessments done, together with the departments of human settlements and water affairs, environmental, forestry, and fisheries, a decision will be taken on the future of such occupations.

“It might happen that the land enquiry process finds that the people using the land may be using the land productively and they may be deserving candidates themselves. Therefore, we will consider those issues in an equivalent light,” Didiza stated.

In case you missed it: Two leading organisations are calling for the SA government to step in and prevent devastation...

Once a neglected piece of land, the Katoo family farm, Threepence, is now a hub of activity made possible by...

In case you missed it: The Kaukou Honeybush Tea made by Theo Adams was such a hit at this week's...

South Africa has managed to secure a major breakthrough for local citrus exporters. Thanks to high-level government intervention, tonnes of...