Here are the basics of farming with pomegranates

Here are the basics of farming with pomegranates

by Nicole Ludolph
in Farmer's Inside Track
Reading Time: 6 mins read
A A

The pomegranate market in South Africa has grown exponentially in the last decade. Photo: Supplied/Food for Mzansi

Since its inception in the early 2000s, Mzansi’s pomegranate tree industry has grown in leaps and bounds. Primarily grown for export, the country has more than doubled its exports between 2012 and 2021.

Louis Swanepoel, co-owner of Ubali Pomegranate and Prickly Pear Farm, encourages aspiring pomegranate farmers to do as much research as they can, especially around the climate required to grow the fruit.

“People wanting to plant pomegranates need to do their homework in terms of soil, water, and climate because pomegranates will not bear fruit in all regions.”

Swanepoel, who is a landscaper by trade, has been farming with pomegranates for the last eleven years. His farm is located in Gauteng, and his primary business is selling pomegranate trees to farmers and the general public.

“Once a year, we host a pomegranate festival over two weekends to sell all the fruit, juice, and products from these pomegranates. We sell products like juices, jellies, jams, pomegranate, and balsamic vinegar reduction.”

ALSO READ: Dragon fruit: The climbing cactus you should be farming

Currently, most of the country’s pomegranate farming is concentrated in the Western Cape. The province produces about 80% of the total pomegranate output, with other regions in the country, which include Limpopo, the Northern Cape, the Free State, and the Eastern Cape, producing the rest.

For optimal production, pomegranate trees require colder winters and hot summers. The trees can take up to six years to mature, and will likely only start producing an optimal yield once it is mature.

According to this guide, created by the Pomegranate Association of South Africa (POMASA), mature pomegranate trees can tolerate cold as low as -10 degrees Celsius. Young trees, especially those under three years old, are however vulnerable to frost as they still have green growth.

The wind is another factor pomegranate farmers need to consider when setting up their production. The trees are very sensitive to wind and need to be protected in areas with extreme winds.

Pomegranate trees are also able to cope with relatively high temperatures in summer. The trees require at least six hours of sunlight, and temperatures of up to 38 degrees Celsius actually help the fruit develop well, though extreme heat can damage the fruit. 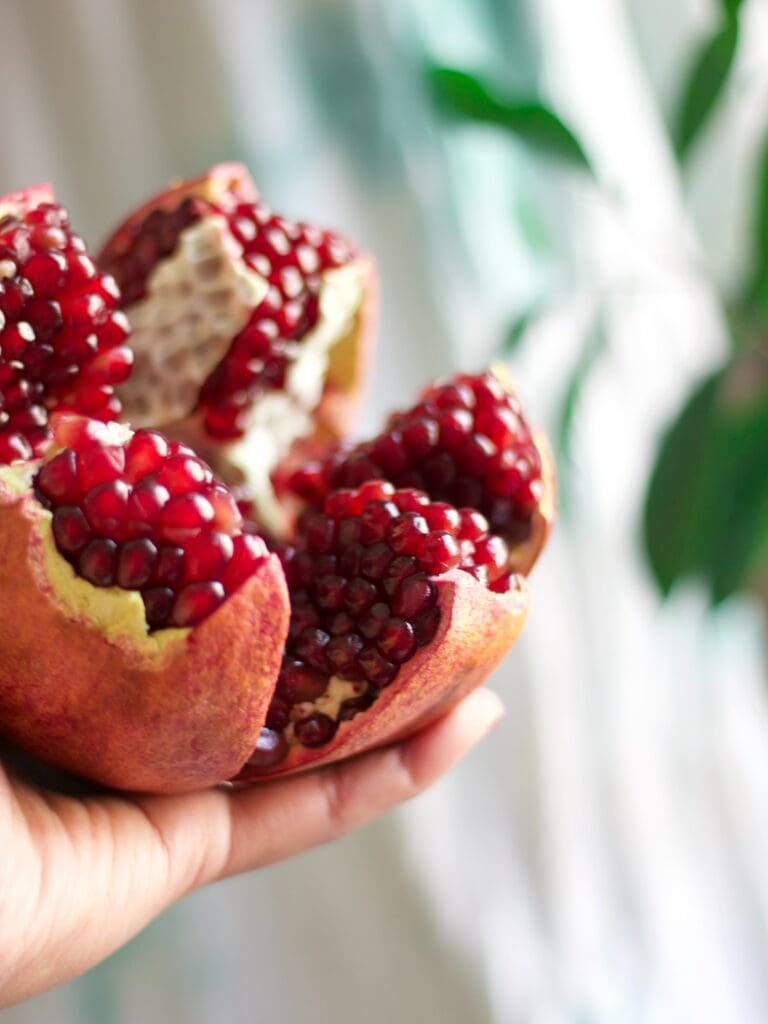 Specialist growers Giving Trees explain that one of the advantages of pomegranate trees is that they are greatly drought-resistant. The trees can survive severe drought, though this of course does lower their yields substantially.

When it comes to soil type, pomegranate trees flourish on a wide variety. Ideally, however, the trees should be grown on well-drained loam soils with a pH between 6.5 to 7.5. Soils that have poor drainage or have a high amount of clay should be avoided as they increase the chances of the pomegranate tree suffering root rot.

Like with any tree, good access to water is critical to the success of the pomegranate. The tree will not flourish in soil that is too wet and instead prefers moist soil. Maintaining consistent moisture levels in your soil ensures that the fruit does not split when the tree flowers, however, the moisture levels should be reduced once the fruit starts becoming ripe.

Pomegranate trees should not be sprinkled, as the water can damage the fruit. To ensure optimal growth, an irrigation system is key. Giving Trees also recommends that you water your pomegranate trees thoroughly at least twice a week, as opposed to daily watering.

How you prune your trees when they are young – under three years old – is critical to their subsequent growth. Trees in their first year of establishment should not be pruned. However, from the second year, you can choose one of two methods to prune your plants, depending on your climatic environment.

The single stem method, where the farmer chooses one main trunk and cuts off the other branches, works best for commercial farmers who do not experience much frost. This method ensures that the tree gets more sun.

With the multi-stem system, which works best for farmers who grow in an environment where there is substantial frost, farmers choose the best six trunks on their trees and cut the rest. This is to compensate for the frost damage young trees are susceptible to.

Generally, farmers should do their main pruning when the trees are dormant. The dormancy period usually occurs from the end of July up until the end of August. Trees become more susceptible to infection when they are damaged, which is why farmers need to use sharp pruning equipment to make clean cuts and avoid the tearing or cracking of the stems.

Advice from a pomegranate farmer

Swanepoel has the following advice for pomegranate farmers:

Sign up for Farmer’s Inside Track: Join our exclusive platform for new entrants into farming and agribusiness, with newsletters and podcasts.

Here’s how to partner with Gauteng’s cannabis programme

Born and bred in Cape Town, Nicole Ludolph is always telling a story. After a few years doing this and that, she decided that she might as well get paid for her stories. Nicole began her journalism career writing science articles for learner magazine Science Stars and interning at Getaway Magazine.

As Mzansi braces itself for winter to arrive in full force, the National Agro-meteorological Committee warns that farmers should be...

All you need to know about growing avocados

Avos have become very popular to grow - both in the backyards of home gardeners and commercial farmers. If you...

Set up a hydroponic hop yard using these five tips

Khaya Maloney is a hit among craft brewers who get their supplies from the founder of Afrileap, South Africa's first...

Pork industry: How to survive ‘the perfect storm’

Surviving the range of local and international pressures that are pushing many pork producers out of the industry requires precise...

Here's how to partner with Gauteng's cannabis programme

Farmers in the rural community of Howick are set to benefit from a first-of-its-kind agricultural unit that has been established...