Real Housewife turns passion for wine into a business

by Noluthando Ngcakani
in News
Reading Time: 6 mins read
A A

The new normal under covid-19 restrictions has made for interesting and innovative entertainment on many fronts. This year’s Agri’s Got Talent  will be no different. Taking on a roadshow format while strictly adhering to lockdown regulations, things will be done very differently in the seventh year of this popular competition.

The top ten contenders including farm workers in the citrus, deciduous fruit, wine, and table grape industries are vying for the coveted spot of the Agri’s Got Talent 2020 throne.

The showcase is a social initiative which aims to celebrate the hidden talents of the people who put food on our tables.

It is brainchild of Hortgro executive director, Anton Rabe, and proudly supported by the Vinpro Foundation, Citrus Growers Association (CGA), Hortgro and the Western Cape Department of Agriculture.

Entertainment experts including vocal legend Frieda van der Heever are currently traveling and training the finalists in vocal and stage performance to get them ready to sing their hearts out come the 9th of October.

Van den Heever is amazed at number of hidden gems of talent she finds amongst the agri workers who take part in the competition.

“It makes me believe in the potential of people that are not necessarily known or famous. They have so much talent and are just a special people. Every day I am blown away,” van der Heever continues passionately.

Her job is made easier by the eager competitors, she adds. “Two days into the competition and I had already met a talented, creative bunch of people who write their own songs. I definitely think this year’s finals will be a on a tightrope.”

Manuel has been working in the agricultural industry since he matriculated from the Bella Vista High School in 2010. The best part about his job is playing a role in food production, he says passionately.

When he was announced as an Agri’s Got Talent finalist, he says, “I was so overcome with joy. I was over the moon! I have been waiting for this moment for years and to show people my talent is a big opportunity for me.”

Maarman says that she is a finalist because she took a literal leap of faith. “When I found out I was in the top ten I froze and thought to myself ‘this is my season!’”

She has been working in agriculture for 15 years and currently works as a crèche supervisor at the Diemerskraal farmstead in Wellington. “At one point my employer sent all the women on the farm on different courses and I wound up in education.”

When asked what makes the agricultural sector such a joyful industry to be a part of, she passionately says, “it’s the constant opportunity for growth. Just like a seed, you grow with time.” 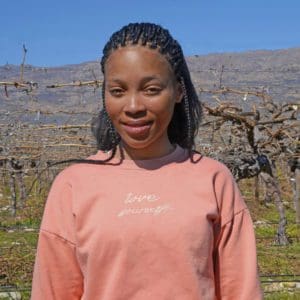 Sampson first began as a seasonal worker on the Sandhoek farm and has since worked her way up to a permanent position. “My employers are still blown away by my passion and sense of responsibility, most likely because I am so young,” she says jokingly.

She is most influenced by international gospel singer Tasha Cobbs.

Becoming an Agri’s Got Talent finalist is just the beginning of her dreams coming true she adds. “I couldn’t believe it, I was shocked… but a good shocked!”

Flink began her career in agriculture as a general worker and picker and is currently in her 4th year on Haygrove Heaven, where she is a production supervisor.

Her favourite time on the agricultural calendar is harvest season. “There is always more to learn in agriculture, which excites me.”

The only downside about the industry, she adds, is that you can never learn enough.

While she may be passionate about learn and growing food, she believes that she has what it takes to make it in the music industry looking to Tasha Cobbs’ “Way Maker” for inspiration.

Hendricks had dreams of going to university after he matriculated in 2015, but due to financial limitations he turned to agriculture instead.

He has been working as a general worker since the beginning of the year, “I love the farming lifestyle, you learn to be patient, which gives room for growth and success,” he says.

Making the transition from learner to hard worker was not easy, however. “I had to find the willpower to put in some elbow grease and do my part to be successful as individual and as team on the farm.”

A classic rock fan, his musical inspiration is Led Zeppelin. “When I heard I was in the top ten I was at a point in my life where I had given up on my music career. I am excited for this opportunity.”

Jonas has worked his way up the ladder on the Rietfontein farm and today works as an irrigation operator on the farm. He remembers the days when he would do piece jobs on the farm planting onions and picking apples for days on end and is happy to have earned his new position.

“I like to think I am a doctor and if I don’t do my job right, my patients – produce – will get sick.”

A constant challenge working in the agricultural sector is the working hours. “There is no break, no public holidays, no weekends I used to feel like I was giving up my personal freedom. But I realise now that it is my responsibility and I should not think of myself, I am feeding people.”

The Agri’s Got Talent announcing him as a finalist was an exciting moment to say the least. “When I heard I was a finalist I thought to myself, is this my big break?”

Willemse began field work as a teenager to provide for his family but grew to love farming as the years passed. “It is amazing that I get to make a difference in agriculture. Every day I give it my all,” he says.

“You learn every day. You even learn to grab every single opportunity to grow the craft without fear.”

Willemse is an old school 90’s rap lover looking to wow the audience with his 2Pac Shakur inspired rhymes. “I was lost but now I am found, the Lord provides when you pray for opportunities.”

Ndzakayi has been working for the CRI for three years. “The best part of my job is assisting with budwood cutting and having to learn more about trees and oranges. I learn something new every day,” he says proudly.

He vividly remembers the moment he was announced as a finalist in the Agri’s Got Talent competition.

“I ran around telling all my colleagues. My manager was laughing at me, but I just couldn’t help myself. When I got home, I told my family. My sister kept on asking ‘Are you for reals Big Brother?’. I am over the moon!”

The announcement even came in the week of his birthday. “What a great present! I also lost two of my aunts just last month – so this is a big break I needed. I am going to give it my all.”

The vocal stylings of Cece Winans are what gets September out of bed. Having grown up in poverty, she turned to agriculture to support her grandparents. Her journey with De Grendel began ten years ago. “The beginning was a bit tough, but I have grown to love this industry.”

“I love working with people and my colleagues bring me some sort of peace, every day during our break times we sit on crates with punnets of grapes and laugh and gossip as we unpack the drama of the day.”

She adds that she thought that she was being pranked when the announcement was made. “I didn’t think I would make it. Even if I don’t win, the support and validation from my family and friends has kept my singing dream alive.”

Van Voight is inspired by the Afrikaans saying, “hardewerk werp vrugte af,” which translates to “You will reap the fruit of your labour.”

At 16 she fell pregnant with a baby girl. This she says has been a blessing, but also one of the many curveballs that life has thrown her. To support her daughter she turned to farm work. “I find great joy in having contributed to a project that evolves into a success.”

Her one regret throughout the Agri’s Got Talent process has been doubting her talent. “I was reminded that I should believe in myself more. I prayed about it a lot and I am thankful for having the opportunity to promote my passion for singing.”

Liewe Lulu: Is it time to take a step back?

With roots in the Northern Cape, this Kimberley Diamond has had a passion for telling human interest stories since she could speak her first words. A foodie by heart, she began her journalistic career as an intern at the SABC where she discovered her love for telling agricultural, community and nature related stories. Not a stranger to a challenge Ngcakani will go above and beyond to tell your truth.

She has worked for the European Union and United Nations and has built an impressive CV working across the globe....

Madonsela: ‘Invest in people like we invest in crops’

IN PICTURES: The deciduous fruit industry gathered at Hortgro's technical symposium to discuss how Mzansi's full agricultural potential can be...

Every fruit exporter in Mzansi will tell you that the export market is tough. That is why local farmers welcome...

South African citrus exports to Russia are down almost 70%. The local farmers who kept up exports despite having to...

Liewe Lulu: Is it time to take a step back?

INSPIRATION: Former chemical engineer, Reggie Kambule, had big boots to fill when he took over from his father to co-run...