The impact of the lockdown has been felt differently across different sectors and industries. In the agriculture space, most operations continued during the lockdown as they were deemed essential.

The production, distribution, supply of food and basic goods as well as its transportation was allowed to continue. Under levels three, four and five the sale of tobacco products however remained prohibited, bringing about a lot of challenges for this particular industry.  The industry is currently challenging these measures in court.

Lockdown regulations permit harvesting and storage activities to prevent wastage of crops already planted. This was on condition that the precautionary health measures introduced to guard workers in the food value chain were adhered to.

For the first phase of the lockdown, farmers continued to harvest their crops, but processors were not allowed to buy and process it. The processing plants are not categorised as an essential service. Even though South African tobacco farmers were allowed to continue harvesting their tobacco, since it was peak harvesting season for them, they had to store the tobacco leaves in sheds, as they could not deliver it for processing.

Harvesting for tobacco normally starts in mid-February and ends around April or May. This put a lot of producers under pressure, as it became very difficult for some producers to be able to continue to service their costs, and alternative means of financing needed to be sourced. Once level four was introduced, processors started buying and processing. The government made concessions to allow all major tobacco organisations to go ahead with manufacturing tobacco and exporting it during level four of the lockdown.

However, processors were weeks behind schedule due to the initial restrictions. However, despite the concession, the sale of tobacco products at various retail and spaza shops in the country is still prohibited.

The biggest concern currently is the ban on the sales of cigarettes as this simply means there is no market for legal cigarettes. Without this market, the question left to ask is whether tobacco manufacturers will continue to buy the raw tobacco. If orders are cancelled, this would definitely pose more challenges for this industry and its producers on the ground. It is at this stage still uncertain when government will allow the sale of cigarettes again, a factor which may continue to be a risk for this sector and its value chain.

Tobacco farmers entered the 2019/2020 tobacco season with continuing drought conditions. In some of the production areas, seedlings planted in field were subjected to intermittent heat waves, with little to no rain to provide relief. The white fly infestation which reached epidemic levels during the previous season, impacted the quality and yield of the 2018/19 crop.

Tobacco farmers however managed the initial drought conditions well and average yields are expected to increase significantly. The main contributor to the yield increase is substantially less hail recorded in growing areas. Mid-season rains resulted in a well-developed crop and above normal qualities are expected. The most significant increase in quality and yields are estimated in the Western Cape.

The illicit and counterfeit trade on dark air-cured tobacco remains a threat to the primary tobacco sector in South Africa. The ban on tobacco product sales during the covid-19 epidemic gave the illicit dealers the chance to thrive and penetrate all the traditionally legal markets. The extremely negative economic effect on farmers due to a decline in the legal demand, and the ban of the cigarette sales during covid-19 are likely to take several seasons to recover.

The total value of tobacco and manufactured tobacco substitutes imported into South Africa in 2019 was R2.78bn, which is a decline from R3.30bn in 2018. The top four supplying markets for the product imported by South Africa were Switzerland, Zimbabwe, Brazil and Mozambique. The value of tobacco exports was R3.14bn, which is an increase of 9% compared to 2018 when the country exported R2.88bn. The top importers by value of South African tobacco product are in the SADC region. Almost 60% of the exported products went to the SADC countries: R1.82bn in 2019, which is an increase from R1.58bn in 2018. 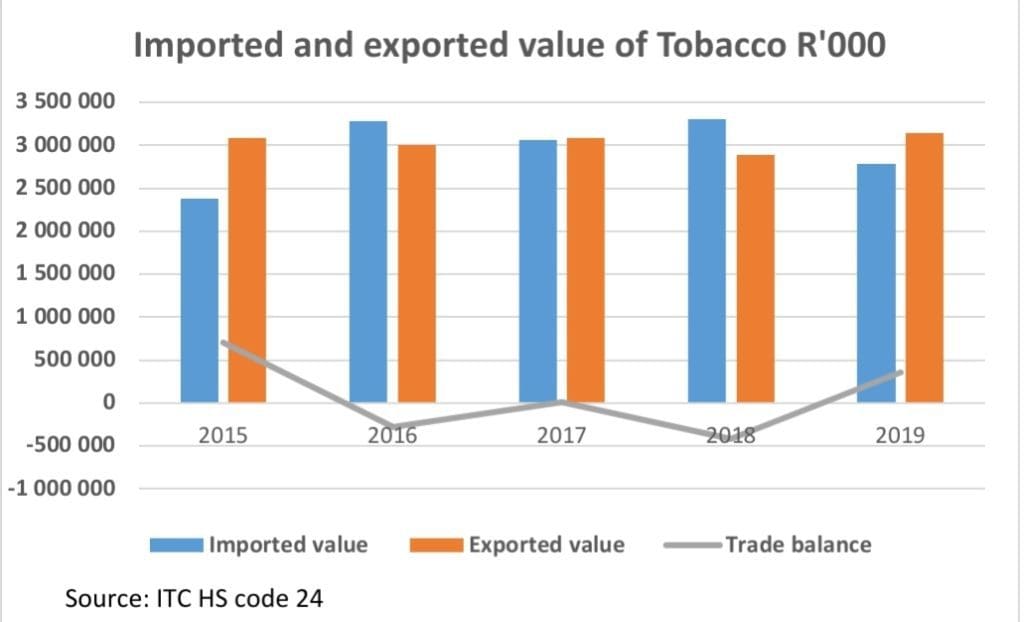 Previous articleLiewe Lulu: I want to make the mielies pop again…
Next articleSpreading the spirit of Ubuntu through olive oil

South Africa might be home to one of Earth's richest flower kingdoms, but as Covid-19's second wave washes over the country, its pressurised flower...
Read more
COVID-19

Karaan: ‘Best minister of agriculture we never had’

Restaurateur: ‘I see the panic on my workers’ faces’

While president Cyril Ramaphosa has again, last night, extended an olive branch to restaurants in the latest Covid-19 restrictions, restaurateurs remain anxious about their...
Read more

Noluthando Ngcakani - 21st Jan 2021
The global health crisis caused by Covid-19 was surely the spanner in the works that we never saw coming. With its continued devastation the battered...

Covid-19 lockdown: ‘Democracy has not been suspended’