The African Development Bank will invest billions of dollars in youth-led agricultural initiatives. They invite big thinkers to apply for a range of programmes saying, ‘We are tired of small-scale stuff. We want to do big things’

Young farmers in South Africa will benefit from billions of dollars availed by the African Development Bank.

The African Development Bank will help young people build a “digitally-driven model of agriculture that can feed the continent’s people and boost prosperity even as the planet heats up.” Through different programmes, billions and billions os US dollars are being released to support the dreams of young farmers and agripreneurs.

Adesina said the investment is through a joint partnership with the Global Center on Adaptation.

Together, they will strengthen African efforts to become more resilient to extreme weather and rising seas, threats worsened by fast-accelerating climate change.

The African Development Bank will put half of its climate finance towards the initiative – $12.5 billion between now and 2025 – and raise an equal amount from donor governments, the private sector and international climate funds.

Adesina told the Thomson Reuters Foundation that Africa struggles on two fronts – with the economic and health fallout from the Covid-19 pandemic, as well as climate shocks.

Drought, floods, creeping deserts and climate-fuelled locust attacks are forcing down crop yields and driving up hunger and migration on the continent, he said.

“It’s a double disaster. We’ve got to change this and give Africa what it needs to be able to adapt well to climate change.”

Patrick Verkooijen, CEO of the Netherlands-based Global Centre on Adaptation, which has a regional office in Abidjan, said Africa is most vulnerable to climate change, despite producing only 5% of global planet-heating emissions.

The new programme will “put adaptation on steroids”, and focus on improved food production, climate-resilient infrastructure, entrepreneurship and better access to finance, he said.

African countries are putting more of their financial resources towards adapting to climate change, he noted, even as their budgets are stretched by the pandemic.

The new Africa Adaptation Acceleration Program will increase farmers’ access to digital services to help them cope with erratic weather. It will also provide finance to young entrepreneurs to set up agricultural businesses.

The bank will use its capital to leverage $3 billion more to support about 10 000 new youth-led companies in areas such as food logistics, distribution and green technology, and to educate a million young people on adaptation.

This investment reduces the risks for commercial banks to lend to young people and provide them with training and skills to become agripreneurs.

Adesina, a winner of the World Food Prize, said the number of African youth – now about 250 million – would exceed 840 million by 2050.

They need to be part of the solution to climate change, even though it was a problem they did not cause.

“What we do with them today will determine the future of Africa,” he said.

Creating more green jobs was a must to prevent many leaving the continent to seek a better life elsewhere, he added.

“I don’t buy (youth) ‘empowerment’ language… what we need is investment.”

The adaptation programme will mobilise $2 billion to expand climate-smart technology to improve agriculture and food security.

This includes access to digital services, which are only available to about 13% of African farmers today, Adesina noted.

Climate advisory services will be provided to 300 million farmers by 2030 under the programme.

Expanding insurance coverage for crops and livestock, to protect farmers from climate disasters, will be key, as well as improving weather forecasts and financial services provided on smartphones and other digital devices, he said.

The bank is already getting drought- and heat-tolerant varieties of crops such as maize and wheat to farmers in east and southern Africa, boosting yields, and testing more ecological ways of farming, such as zero-tillage, in places like Ghana.

It has also pledged to raise $6.5 billion to drive forward Africa’s Great Green Wall project to plant and restore trees, grassland and vegetation on the Sahara’s southern edge to keep the desert at bay and help farmers stay on their land.

‘We want to do big things’

“We know what works – we are just all tired of small-scale stuff. We want to do big things.”

African agriculture needs to become more competitive, efficient and dynamic to feed a growing population and turn farming into a thriving business instead of a “way of life”, he added.

The size of Africa’s food and agriculture market is expected to exceed $1 trillion by 2030, which would represent a tripling in two decades, offering far bigger business opportunities than investing in outdated forms of dirty energy, he noted.

Want to apply for funding?

Details about funding opportunities are distributed via Farmer’s Inside Track, Food For Mzansi’s channel to support up-and-coming farmers and agripreneurs. Sign up here to receive the free weekly newsletter or listen to our free podcast on Spotify, Apple Podcasts or Google Podcasts.

Experts have warned small-scale pig farmers to be cautious of mixing their own feed in a desperate attempt to find an alternative for sky-high...
Read more
News

Nearly 800 cows in northern KwaZulu-Natal have now tested positive for bovine brucellosis. A report by a veterinary services investigator reveals that the infection...
Read more
News

A wild and ailing sheep found in a forest in Australia has yielded a fleece weighing more than 35 kilograms after being shorn for...
Read more

Staff Reporter
Researched and written by our team of writers and editors.
40,205FansLike
4,809FollowersFollow
10,334FollowersFollow
337SubscribersSubscribe 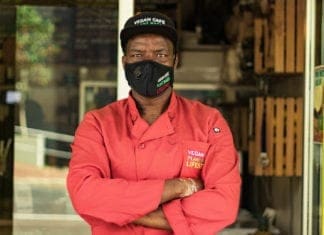 How a Zim refugee became a top vegan restaurateur Copy

Duncan Masiwa - 26th Feb 2021
Raised by his parents and grandparents, who were all farmers, Elisha Madzivadondo decided a long time ago that he too would follow in the...

AfCFTA could be ‘jackpot for SA farmers’