For 30-year-old home cook Sinoyolo Sifo it is odd that most men still believe cooking is a woman’s job in a world where a significant number of chefs in the professional kitchens are male. This is a clear indication that men do not lack the capacity to take on this role, says Sifo.

He believes the construct that cooking is solely a gender specific role is outdated. To prove this, the Durban-based cook took to social media this year and started an Instagram page he calls ‘Sifo The Cooking Husband’ where he expresses his creativity in the kitchen by sharing easy recipes and cooking advice for husbands.

“I think I am trying to break that stereotype to try and encourage more males to be active in the kitchen. In the olden days females were in the kitchen, mostly because [men] had to work, but now everyone is working you have to share domestic responsibilities equally,” Sifo believes.

Born in Mthatha in the Eastern Cape, Sifo has always had a passion for food. This love stems from the influence of his father, Mthutuzeli Sifo.

Sifo senior is a farmer and butcher. He owned a chain of butcheries and sold his vegetables to local supermarkets. Growing up, the foodie helped cultivate, pick and sell his dad’s produce, which filled him with the urge to experiment in the kitchen. “I’ve always loved cooking. In my youth I used to experiment with some dishes, but I never took it seriously,” he says.

Sifo is a pharmacist by profession. In 2013, he completed his B. Pharm degree at the Nelson Mandela University (NMU) in Port Elizabeth. Sifo also met his wife, Nondumiso, at university.

“My wife cooks amazing food, to be honest. What made us date in the first place was her cooking.”

“My wife has been the believer. Sometimes you don’t take things seriously, but I think the way she believed in me and always tells me that we can make this dream come true, because eventually I would like to open up my own restaurant,” he says.

The foodie admits that his wife stole his heart with her fantastic seven colors meals. When they met six years ago, the couple lived on the university campus residence. “My wife cooks amazing food, to be honest. What made us date in the first place was her cooking,” he says.

In 2018, the couple moved to Durban, where Sifo works as a pharmacy manager. The home cook expresses his creativity through food. He believes that cooking is like art, you have to envision a dish before you can execute it.

He has stumbled many times in the kitchen. It is not easy to navigate your way through the kitchen without passion, he says. There is always room for trial and error, but moreover there is room for redemption.

“When I started cooking, I used to burn my food all the time,” he says. “One evening I was cooking dinner for my friends and I burned six steaks. I was so angry at myself and I wanted to redeem myself, so I actually left the house and went to go buy more,” he says.

He advises aspiring home cooks and chefs to always “follow your heart and follow your instincts.” He has aspirations of starting cooking classes catered specifically for husbands. He hopes that this will be the next step that can lead to the fulfillment of his long dream of owning a restaurant one day.

“Give the slum a try now,” Vuyo Mayesa (40) hums at the end of the telephone line. These are not just the lyrics of...
Read more
Mzansi Flavour

When food influencers like Mogau Seshoene and Siba Mthongwana are household names in kitchens throughout the globe, you would be crazy not to be...
Read more
Cookbook

After millennia, Jewish Passover is still a living feast

Celebrating Passover, millions of observing Jewish people have gone to great lengths to put out their mouth-watering spreads on the Seder table during the...
Read more

Noluthando Ngcakani
With roots in the Northern Cape, this Kimberley Diamond has had a passion for telling human interest stories since she could speak her first words. A foodie by heart, she began her journalistic career as an intern at the SABC where she discovered her love for telling agricultural, community and nature related stories. Not a stranger to a challenge Ngcakani will go above and beyond to tell your truth.
43,179FansLike
4,809FollowersFollow
10,334FollowersFollow
405SubscribersSubscribe 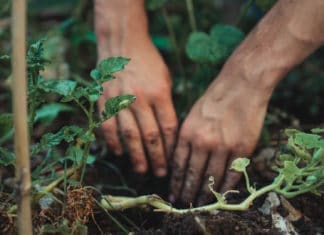 What veggies to plant before the end of April

Noluthando Ngcakani - 18th Apr 2021
What autumn blues? You might think that the upcoming colder months are not great for growing veggies in Mzansi, yet April is the optimal...

Education is key to improving the African agribusiness