Food security crisis: Africa should be the answer

Seasonal farmworkers: ‘We need our UIF money to survive’

How to get the ball rolling on organic certification

Fixing agri challenges: ‘ANC no longer has a choice’

Food security crisis: Africa should be the answer

by Dr Peter Oberem
in Between the Headlines, Food Security
Reading Time: 5 mins read
A A

We need to consider all historical factors if we want to provide safe and secure food for future generations, writes Dr Peter Oberem, the managing director at Afrivet.

The earth is said to be 4.5 billion years old, with the earliest man (hominins) inhabiting it 4.2 million years ago. Since then, evolution has brought about many changes as the earth and its inhabitants adapt to a new way of life.

As illustrated in this graph, man and earth have evolved over time. The first settled agriculture and domestication of sheep and goats, 12,000 years ago, brought significant changes to the lifestyle of humans, including a much less varied diet (mainly wheat and some meat) than that of the early hunter-gatherers. Work involved far more repetitive tasks leading to joint pain and back troubles, as well as teeth that wore down as a result of sand in wheat in products.

More cooked food, as opposed to raw food, was eaten, resulting in vitamin and mineral deficiencies and people being smaller with conditions like weaker bones, anaemia and scurvy.

All this over a period of 12,000 years, a far cry from the diet and activity level of our ancestor species over the previous 2.5 million years.

In addition to this, the further effect of urbanisation and a relatively stable diet tremendously increased the human reproductive rate, further placing the emphasis on where our food will come from.

At the dawn of the agriculture revolution, about 1,000 years ago, the world human population consisted of 5 million people. Around the beginning of our new calendar (2 020 years ago), an estimated 200 million people were inhabiting the earth. With the arrival of the industrial revolution, it further resulted in a tremendous population increase, reaching 1 billion by 1800.

To see it in perspective, the human population doubled between 1970 and today, reaching 7.8 billion. Fortunately, this unsustainable growth rate is slowing, and it is estimated that it will take 200 years to double our current population statistics. Nevertheless, the world population is expected to reach 9 billion by 2037 and 10 billion by 2057. 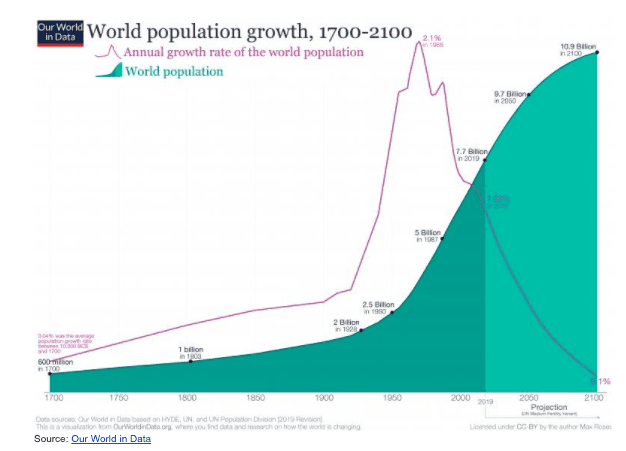 What will this mean for food security?

The effect on our food needs

With the human population currently at 7.8 billion people and predictions showing that the biomass material continues to increase yearly, we need to realise that the food demand will increase as countries develop and populations require better access to higher quality food, especially meat (protein).

With the expected 9 billion people that will roam the earth in a mere 17 years, it is not so much a lack of resources (natural or otherwise) that is cause for concern but the impact of humans and their impact through intensification of farming, that is causing ecological degradation to a point of collapse and no return.

At the turn of this century, 37% of the earth’s land surface was under agriculture; 11% (or 14 billion hectare) is permanently under crops; and 26% is used permanently for animal production. This total area of the earth’s landmass under agriculture is estimated to have reached 50% during 2020. It was only 7% in the early 18th century. The seven-fold increase is as a result of the need to feed the massive population growth generated by the industrial revolution.

We are now in the initial phases of what is called the 4th industrial revolution (4IR) and the physical work that is demanded of us decreases as intelligent mechanisation increases.

The skills needed to cope and survive in the milieu created by the 4IR are all related to cognitive ability. Research has clearly shown that supplementation of children’s diets greatly improves cognitive ability as measured in school results.

It is estimated that food production, in particular that of protein has to double over the next 17 years to ensure food security and food of the right type and quality for the estimated 9 billion people.

In South Africa, before the covid-19 crises exacerbated food insecurity, the figures are shocking.

In her book, An Empty Plate, Tracy Ledger states that about half of all South African households had a diet of mainly maize meal, bread and sugar (mainly as these are energy-rich and cheap). She also gives the following shocking 2008 statistics:

almost 40% of South African children were suffering from measurable effects as a result of poor nutrition.

Land that can be utilised for food production is limited. We are already utilising 50% of the earth’s landmass for agriculture. There is little room for agricultural expansion in developed countries like Europe, North America and Asia, while in South America the room for expansion is limited and would result in the devastation of the earth’s lungs (the Amazon and other forests).

It is only in Africa where there is currently still land available for agriculture to expand. This, of course, is an opportunity for the continent to produce food, reduce hunger and generate economic growth. But there is room for improvement as the land that is available needs to become far more productive to contribute to food security globally.

In South Africa, just over 50% of our livestock is commercially farmed with the other almost 50% being kept by small-scale owners (the large majority of them on the communal lands of the former homelands). Commercial farmers produce 90% of the meat that reaches the formal market, while the small-scale stock owners are only producing 10% of the national meat supply. Clearly, there is room for improvement here.

Research done at the Dohne research station in the Eastern Cape showed that the genetic makeup of the animals from the communal areas is not the reason for poor productivity. Rather, it showed that by merely managing the health and nutrition of these animals correctly they are able to improve all production parameters measured (conception rates, calving rates, weaning rates and weaning weights) by 40%.

With the 5 to 7 million cattle owned by small-scale owners in these areas, it can create at least a 20% increase in the beef produced annually in South Africa or an extra 160,000 tonnes of beef worth R6.4bn. The same principle would apply to the small ruminants (sheep and especially goats).

South Africa and Africa has another unique opportunity to increase meat production without further damaging the environment; increasing the game meat (venison) industry.

Indigenous game animals have evolved and can survive in conditions where cattle and sheep struggle to produce their optimal levels. These animals have adapted to survive and produce well in conditions that are sometimes too harsh for efficient beef, milk, mutton, and wool production from exotic domestic stock.

In addition to this, the meat from game animals is particularly well suited to the human diet as it is low in fat, high in protein and contains many necessary and beneficial unsaturated fats, minerals and vitamins. The low pH of game meat also gives it a better shelf life by inhibiting better growth of bacteria.

Another benefit is that game ranches carry a much wider number of species and are far less intensively managed, the biodiversity on such properties benefits enormously.

Africa, especially South Africa, is well positioned to make a big difference and contribution to the looming food security crisis.

One of South Africa's leading gaming and hospitality companies is doing its bit to help fight climate change, while also...

Seasonal farmworkers: ‘We need our UIF money to survive’

“We are told that our applications are still in boxes waiting to be processed. I have no hope.” After months...

Farmers are already feeling the pinch after government imposed a 21-day nationwide ban on the movement of cattle. This, as...

Farmers are already feeling the pinch after government imposed a 21-day nationwide ban on the movement of cattle. This, as...

How to get the ball rolling on organic certification

Fixing agri challenges: ‘ANC no longer has a choice’