More than R46 million has been set aside by the North West government to support 812 smallholder farmers with crop production inputs ahead of the planting season.

Manketsi Tlhape, the MEC for Rural, Environment and Agricultural Development, announced this boost for farmers on the Welverdiend farm, just outside Delareyville. She considers the beginning of the planting season as a clarion call by government to all residents “to gird up their loins and engage in food production activities of all forms”.

Tlhape introduced the departmental crop massification programme, an intervention by government to support both smallholder and identified black commercial farmers to put back arable land into production.

Tlhape said this was a great achievement and has assured Bokone Bophirima residents that her department will continue to support all dedicated farmers within the borders of Bokone Bophirima to continue producing more food.

Currently, North West Province is the number one producer of sunflower in Mzansi.

MEC Tlhape reiterated that 50% of the budget in this financial year has been channelled to benefit women, youth and people living with disabilities in the agricultural sector. “We need to do more to ensure that we give support to these groups in order for them to participate into mainstream agriculture as formidable players to advance the future of the sector by tilting the statistics as they remain.”

Tlhape is adamant that the measures pronounced by the state President Cyril Ramaphosa will soon bear fruit and more farmers will benefit via the stimulus package, blended funding and other measures as announced during the recent job submit.

One of the farmers, Solomzi Booysen from Welverdiend, welcomed the government support to smallholder farmers in the region. “We really appreciate it and our job is just to make sure that we produce.”

For the 2018/19 financial year, the department has earmarked 50 farmers for the black commercialization programme. 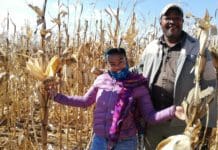 Road trip leads economist to discover ‘the heartbeat of our nation’

Agriculture can be the big YES for unemployed youth