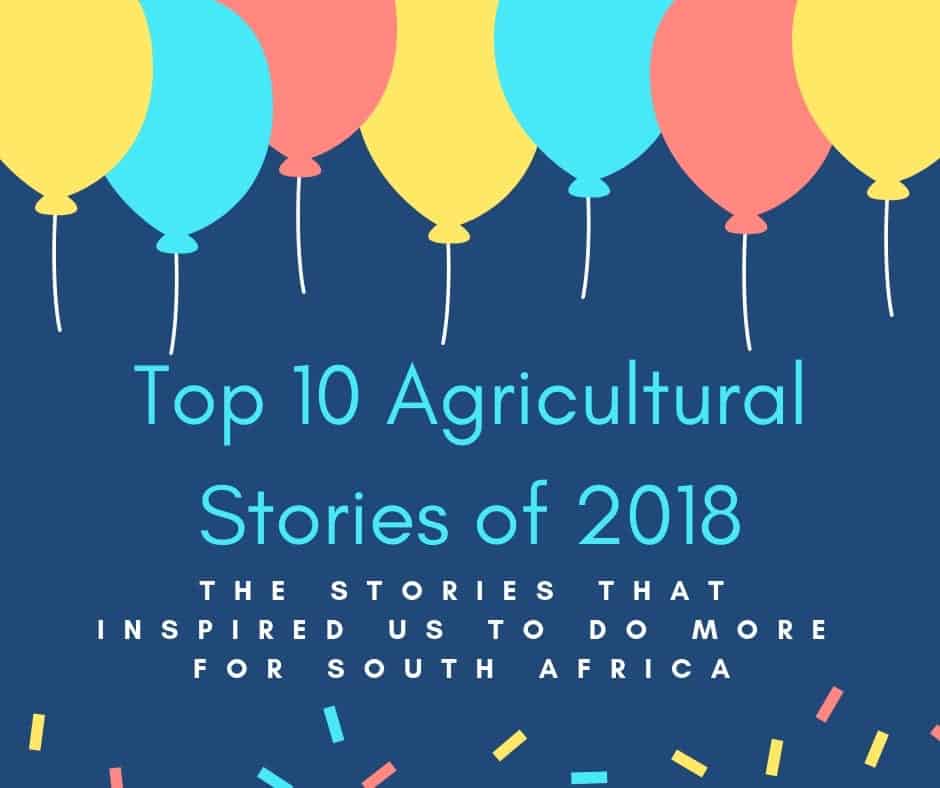 How Hosea started a farming business with just R9000

Top tips to protect yourself against livestock theft

What you can do to prevent another booze sales ban

2018 has been an incredible year that has taken us on a journey with many of South Africa’s agricultural leaders. In case you have missed it or just want to recap, here is Food For Mzansi’s 10 fave stories of last year.

Tawfeeq “Eggbae” Brinkhuis had us drooling for all the right reasons. He is hardworking, intelligent and successful.

This 25-year-old egg farmer, who won the Durbanville Regional Prestige Agri Worker award, shared some of the experiences that have brought him to where he is today. Brinkhuis also aims to expand egg production on the family farm.

Asparagus might be considered a boring veggie by some, but in South Africa the VKB Group has proven that it can be a great tool for job creation.

This leading agricultural enterprise has announced that it has created 46 full-time and more than 850 seasonal jobs through a project for new asparagus farmers. VKB showcased its enterprise model for new farmers, in partnership with the Jobs Fund at the Morgenson farm near Rosendal, a predominantly maize, cattle and wheat farming town in the Free State. Get the full low-down here.

3. Praising in the rain

Singing and dancing in the rain may sound like a scene from a movie, but for Siviwe Tikana it was a sight of pure joy when the heavens opened and poured down much-needed rain on his family farm.

Tikana, who Food For Mzansi readers came to know as #BlackBoerseun, is a dairy farmer from East London. He moved the hearts of many when he posted a video of himself gratefully singing in the rain.

“We had some water left in our dam, but way too little to even send the cows to that side to drink because they would get stuck in the mud,” says Tikana, general manager of the family-run Rosedene Dairy Farm.

You absolutely need to watch the video of Tikana singing in the rain.

4. Attack inspires Back to do more for people

Charles Back has set and given us a great example of what it is to have purpose in life. This farmer from Paarl in the Western Cape has empowered many, especially those who work and have worked for him, over the past few years.

Through his farm, Fairview, Back has created a number of opportunities for those who had the dreams and aspirations but lacked financial stability. And even though he has come so close to death during a robbery, Back continues to invest in his people. Read more on how a farm attack inspired Back to invest even more in people.

Perry Feldman, a semi-retired farmer and entrepreneur from Parys in the Free State, has helped to restore the dignity of many families, who have been previously dispossessed, through his Khaya Lam (“My Home”) Land Reform Project.

This project aims to present those affected with title deeds to their current homes and up to date more than 3000 title deeds have been awarded to people in townships.

Khaya Lam aims to secure the property rights of between 5 and 7 million previously dispossessed families in South Africa by giving them the title deeds to their homes. Read more on the inspiring Khaya Lam story.

6. From hair salon to boardroom

What would a previous hairdresser know about farming? You would be surprised and that’s why they say never judge a book by its cover.

Preline Swart, a former home-base carer and hairstylist, was honoured by the CEO of Global Award as one of Africa’s most influential women working in agriculture. She also sits on the board of a few agricultural companies such as Grain SA and Agri SA’s Commodity Chamber.

Although she has to currently face some health issues, Swart is determined to help uplift other women in this male dominated industry.

Imraan Ishmael, also known as Lenasia’s “sheep uncle”, has broken so many barriers in the agricultural sector.

“I developed an innate desire for farming from an early age,” Ishmael says. “My interests were always around agriculture. I’d developed and run different businesses, but my heart was always in agriculture.” Except for sheep, Ishmael farms with chickens, cattle and goats. It has not always been easy as he has had to face Islamophobia however that has not set him back and his business continues to flourish.

8. How Kleinjan and Cois forged their farming destiny

Hailed as the first black farmer to receive the award of South Africa’s Cattle Farmer of the Year 2015, Kleinjan Gasekoma, remains the humble man that he has always been.

He has put in many hours of commitment to his love for farming, but he couldn’t have done it alone.

With the help of his good friend and mentor, Cois Harman, Gasekoma’s success continues to grow.

9. A great example of farming mentorship

Selflessness has become a scarce trait amongst many. However, altruism is certainly synonymous with VKB mentor Francois Crause who has been mentoring new farmers for the past six years.

Crause, who is a mentor as part of a project by the VKB Group, a leading agricultural enterprise, the Jobs Fund and the Grain Farmer Development Association (GFADA), is also passionate about farming.

10. The rise of the craft beer movement

Five years ago, the term “craft beer” could easily have been mistaken for a swear word or an upper-class sangoma’s attempt at making ginger beer. Since then, the industry has exploded with a brewery almost behind every hipster’s man bun – each bringing ranges of beers with the weirdest names, including “Durban Poison Cannabis Lager”, “Karma Citra IPA, or “Zero to Hero”. Read our story on the rise of the craft beer movement here.

More illegal booze on streets than legal wine and ciders

The Makoeles got the land, and they’re nurturing it!

More illegal booze on streets than legal wine and ciders