Social media is abuzz with “lockdown chefs” who have taken to the kitchen to express their creativity. For many, cooking has become more than a hobby, it has been a way to stay sane during the lockdown period.

Such is the case for radio presenter and retired rugby player Ricky Schroeder, who says cooking has become his “zen”.

For Schroeder, life before the lockdown was filled with the hustle and bustle of his career as a radio personality for Cape Town-based radio station KFM. 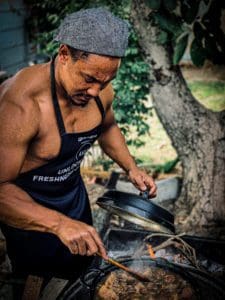 He rarely had the time for a mental wellness check, he says. But since the national lockdown, cooking has become his escape.

Cooking is not just for survival. Cooking is life, believes the avid home cook.

Being cooped up in his familial home in the Western Cape with his dad Derrick and brother Clyde has been the source of inspiration behind his rekindled fondness for kitchen experimentation.

“This lockdown period has made [food] a passion for me. In the beginning it was just for survival, because hey you need to eat!” he bursts out in laughter.

His mother, Rika Schroeder, taught him everything he knows about cooking. While playing rugby for the Eastern Province Kings, Schroeder’s mother had fallen ill in 2017. He decided to retire. A year later, she passed away. Now he cooks to keep her memory alive.

“For me it’s just about continuing her legacy. A few weeks before she passed, I literally told her that the reason we are where we are is because of the sacrifices she has made for us.

“It’s just about honoring her legacy as I go on as well.”

Schroeder was born in Worcester and enjoyed a fairly typical childhood. “We loved food in our house and had a wonderful, supportive mom and dad.”

Although his parents encouraged him to pursue his rugby career, they also motivated him to seek out other passions like public speaking. Today he is a radio broadcaster, motivational speaker and TV personality.

Schroeder’s rugby career started at the tender age of six. His passion for the sport saw his talent cultivated at the Paul Roos Gymnasium school in Stellenbosch, which is known for producing some of Mzansi’s best rugby players.

He matriculated in 2009 and later studied at the University of Cape Town. But opportunity knocked and Schroeder sought out greener pastures in Johannesburg, to start his professional rugby career as a scrum half for the Lions.

With his rugby career, his relationship with food was based purely on survival. But this changed over time when he had to feed himself.

“When I lived on my own, I used to call my mom all the time asking her for inspiration on what to cook.”

“I always remember coming home on weekends. There would always be a wholesome meal waiting for me and my favorite was usually the green bean lamb stew that my mom used to make for me.”

His dad is not a bad cook either.  “He is now the boffin at making curries, he can make a mean curry biryani.”

Schroeder’s fondest memory of the kitchen are moments with his mother. “We used to sokkie in the kitchen together and really just have a good time while we were cooking together.”

“Now I try and sokkie with my dad a bit, but the man is a bit challenged when it comes to the dancing,” he jokes.

Project Runway host Heidi Klum is famous for saying, “One day you’re in, and the next day you are out.” When British celebrity chef...
Read more
Catering Company

Food inspiration is all around, believes Apriena

So, what do you do when your cooking mojo runs dry? Turn to that box of Salty Crax you have been saving for a rainy...
Read more
Mzansi Flavour

Many South Africans would much rather put their thumbs to work for an Uber Eats request than hit the kitchen after a long day’s...
Read more

Noluthando Ngcakani
With roots in the Northern Cape, this Kimberley Diamond has had a passion for telling human interest stories since she could speak her first words. A foodie by heart, she began her journalistic career as an intern at the SABC where she discovered her love for telling agricultural, community and nature related stories. Not a stranger to a challenge Ngcakani will go above and beyond to tell your truth.
40,552FansLike
4,809FollowersFollow
10,334FollowersFollow
342SubscribersSubscribe

Webinar: Is the expropriation bill an effective tool for transformation?

Home food garden: What to plant in March

Noluthando Ngcakani - 3rd Mar 2021
Yes, we know, organic vegetable gardening in your own home food garden is an activity that can be challenging. But it is really the...

Rooibos: It’s harvest time, and we have a front-row seat

From cooking during Durban July to starting his own business in...